I was recently invited to Crafty Distillery, the home of Hills and Harbour gin. Having tasted their gin and hearing a lot about them, I didn’t take much convincing.

Situated just on the outskirts of Newton Stewart, overlooking the Galloway forests, this distillery was definitely not what I expected.  Really modern, lots of quirky decorative touches and not a copper pot still in sight! (More on that later).

Graham, one of the founders of Hills and Harbour, was like a proud parent showing off the property that currently holds the title “Gin Destination Of The Year”.  The furniture in the café all come from a single tree, the tree trunk bar (such a focal point!), the tables and benches all fitted by his uncle and just look really, bloody cool. The whole ethos of the place is very clearly to support and champion their local area. They push their location in a way that I haven’t come across very often in the drink industry.

It has become popular to bring out a gin and call it craft and use a specific location as it’s selling point.  But I reckon you would be shocked to know how many “Scottish” gins were actually produced in England or “craft” spirits that are made at a large distillery on behalf of someone else. In theory I have no issue with either of these situations – as long as the brands are honest about their situation most consumers don’t care. It is the lack of transparency in the industry that makes it all a bit unseemly.

Hills and Harbour took a very different approach.  It was a good few years between Graham deciding that he wanted to make a spirit and the Hills and Harbour brand being born.  They could have saved themselves a fortune by doing what everyone else does and buying in a base spirit, but they set up their distillery to produce their own grain neutral spirit.  This was one of the things I was interested to talk to them about, why would you do this?

Our tour guide, Fraser, had a lot of enthusiasm and our tour was informative and fun. It was like having one of those great chats at the pub with your mate who’s mad about gin!  He clearly loves what he does.  He talked us through the 12 day process from crushing and milling the wheat (400kg for each batch), mashing, malting (in house), fermenting and distilling.  All done on site and at the end they have produced a 70% neutral spirit.  Their reasoning for this mammoth effort is that they have so much better control over their product, an obvious sense of accomplishment as well as setting their distillery up for the future.  The one thing I got from the team at Crafty is that they have lots of plans and always have their eye on the future. Crafty buggers indeed!

Their goal was never to jump on the gin bandwagon, it has always been to produce a spirit that they can be proud of in every aspect of it’s production.  They are set up well to produce other spirits in the future if the markets change – but there is that lack of copper still …

Crafty made the decision to have a stainless steel still instead of the traditional copper one.  A big reason has got to be the cost and also the time frame to get one handmade. They also say that a stainless steel still, means they don’t have to worry about having it rebabricated in the future, like a copper one would need to be.  Because copper is obviously an important aspect of the gin making process they have a chamber full of copper coil catalysts which when the spirit passes through them, help strip out the sulpher compounds. They believe this makes their process just as efficient as those copper stills.

So after they have their base spirit we come to the botanicals.  Hills and Harbour isn’t just a great name.  From the hills come the Noble Fir and from the Harbour comes the Bladderwrack Seaweed – clever eh! Their bottle is also a bit cool. When it’s sitting on the bar it is dark green like the forest, yet if you lift it up to the light the colour shifts to that of seaglass.

Our tour guide related the experience of recipe selection to creating a mouth party.  They had their base botanicals of juniper, coriander seed and others to give the gin an established London Dry taste.  But they also have dried mango, valencian orange and their Noble Fir and Seaweed.  Sweet, salty, savoury, sour and umami are what our bodies crave to balance our palate.  This gin has clearly tried it’s damndest to achieve that balance.

The distillery run a Galloway Gin Escape where you can go out and forrage for their botanicals and see where they are found, then back to the distillery to make cocktails with them and tour the distillery.  It sounds incredible, and seeing the rolling Galloway hills on our visit I can only imagine it would be a cracking day out.

After our tour we were able to get a good taste of their recommended serve and I could go on about the balance of juniper and pine, about the sensory explosion and layered flavours and sweetly tropical notes. Or I could just tell you it was a damn good G and T! 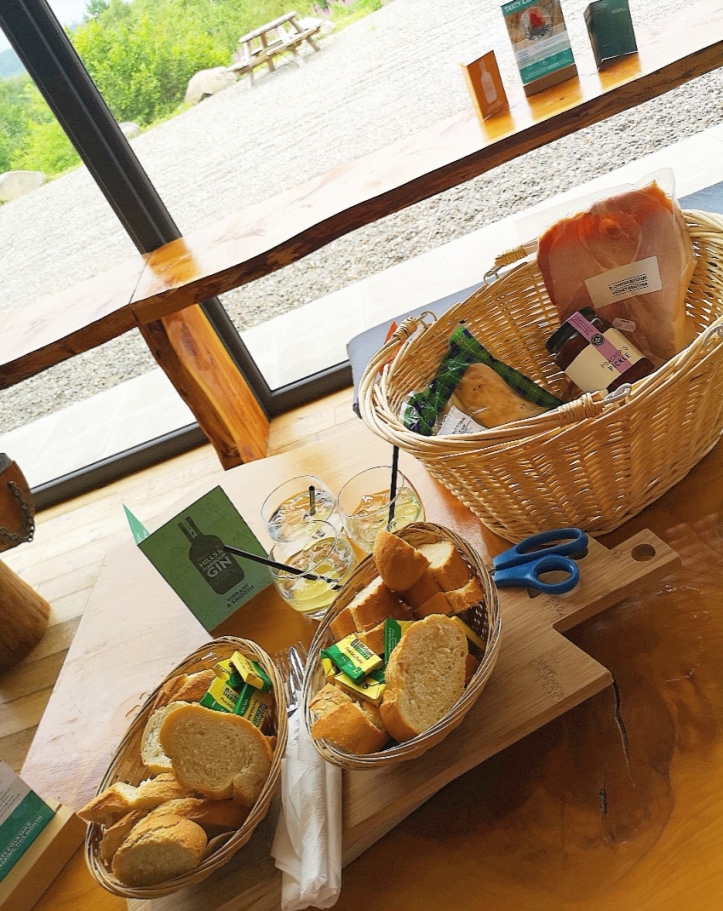 We were then treated to their famous picnic lunch.  Equipped with a picnic basket you are faced with a chiller cabinet crammed with luxury goods.  All from local suppliers it was great to see lots of local brands.  You can pick three items along with crusty bread and butter for £12, this easily feeds two. Items such as smoked chicken from Galloway Smokehouse, Laganory cheese from The The Ethical Dairy and beautiful ham from J.D Owens Butchers.  This is a really cool touch and helps make a great connection in the local area.  The waitresses who served us both raved about the produce and you get a definite feeling of pride for the Scottish countryside that the distillery is situated in.

Our visit was rounded off by trying some amazing cocktails made with their signature gin as well as their world first distilled cocktail. I won’t say too much about that as I am going to write up a full review for the Smokey and Citrus Distilled Cocktail separately – it deserves more than just a paragraph! It is very moreish and so unique.  The cocktails were a great way to showcase the versatility of the gin and also a fantastic way to end our day looking out at the misty Scottish forests.

My biggest takeaway from the Crafty Distillery experience was the labour intensity of their production.  Bring able to tell that the product being made had a purpose other than instant revenue.  I loved the passion, and coming from the South West of Scotland myself, it was great to see the area being championed.

Hills and Harbour Gin needs no small blogger recommendation as it sings for itself. It is making waves at awards year on year and has found itself in independent wine merchants all over as well as John Lewis.  They are taking part in International Scottish Gin Day (3rd August) and you can find out info about that here –ISGD.

If you are looking for a trip to Scotland then don’t make the mistake of missing out on Dumfries and Galloway. It’s a beautiful area and Crafty Distillery are putting it on the map.  A must do on any UK gin journey, they are up for Distillery of the year in the Scottish Gin Awards for a reason. We travelled from Dumfries by Stagecoach and a return group ticket for up to four people costs just £16 – making it a cheap day out.  The scenery on the trip was out of this world and makes for a really fun day trip!

Thanks so much to Graham and the Crafty team for inviting me along for the day.

Disclaimer – I was invited along to check out the distillery and have a complimentary tour and tastings, but all views are my own and no restrictions were placed on my review

There was an error retrieving images from Instagram. An attempt will be remade in a few minutes.