With so many gins on the market it can take something more than a good advertising campaign to entice me in. Sometimes a gins story and the person behind the story manages to capture your attention. I looked into Graveney Gin after following the founder and head distiller on Twitter. She really is someone I admire so I put my money where my mouth is and purchased a bottle in the hope it would live up to my expectations.

Victoria Christie had been drinking gin since well before it became fashionable when she went to Portobello Road Ginstitute back in 2013. She realised that making gin would be the dream job. And encouraged by her partner she bought her own 5l still. Lots of hard work and personal sacrifice later and Graveney Gin was born.

Turning to other distillers to ask how to go about making gin seemed crazy to the former banker. But she soon realised how welcoming the industry is and how keen they all were to impart and share information. She was able to get valuable insight to allow her to move her dream forward and in 2015 with just 200 bottles, Graveney Gin was launched at a local festival in Tooting, London.

The passion and drive to create a tasty gin won her some loyal customers and word of mouth soon turned into sales. In 2016 after a successful fundraising campaign, Victoria was able to buy a 30l still and also moved into premises in Tooting market, having outgrown her kitchen! Now she produces 30 organic bottles per batch, allowing her to own the term ” nano batch”. Her main values are passion, producing tasty gin, being charitable and organic.

Each small batch is produced using fresh botanicals meaning that each batch will be slightly different. She uses a wheat based neutral spirit with Juniper, Angelica, Orris Root, Pink Grapefruit Peel, Fresh Orange, Boaobub and Goji Berries. Diluted to 45% it is certified organic.

Graveney Gin on the nose: A juniper hit with a light sweetness and a deeper red fruit burst – from the Baobub. This smells really good and makes you interested in getting a taste. 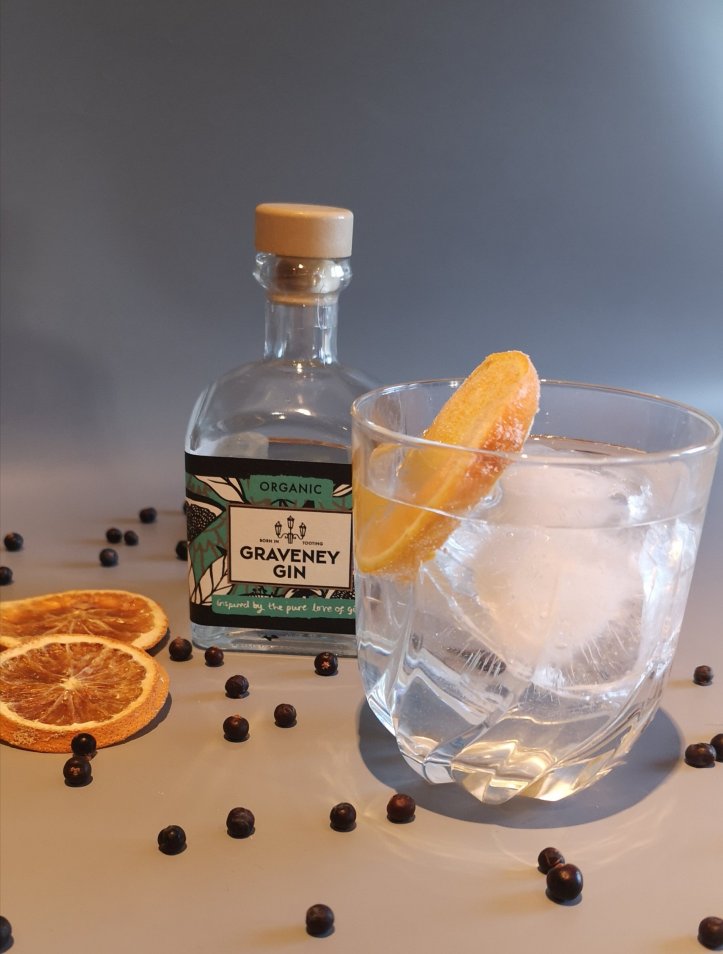 First taste: Zesty, which was suprise as I didn’t get citrus at all from the smell. A faint whisper of pine and a great ginny juniper smack which made me happy. I am a juniper freak and am always left a little dissatisfied by gins that aren’t forward in their juniper. You can read about my favourite gins here: My Favourite Gins

Next taste: This opens up with a few drop of water and the fruity flavour of berries comes to life with a slight bitter undertone from the grapefruit. When ice is added it mellows and a bit of spice is left on the tongue. When tonic is added is makes this a very easy drinking gin. You get the juniper hit followed rapidly by a citrus rush which lingers for me until the berry sweetness comes through. Fresh and light but a great dry aftertaste.

Thoughts: Anyone who enjoys a juniper forward London Dry Gin will be happy with this spirit. It offers a great flavour burst to the palate without trying to be too many things – restraint is a virtue. 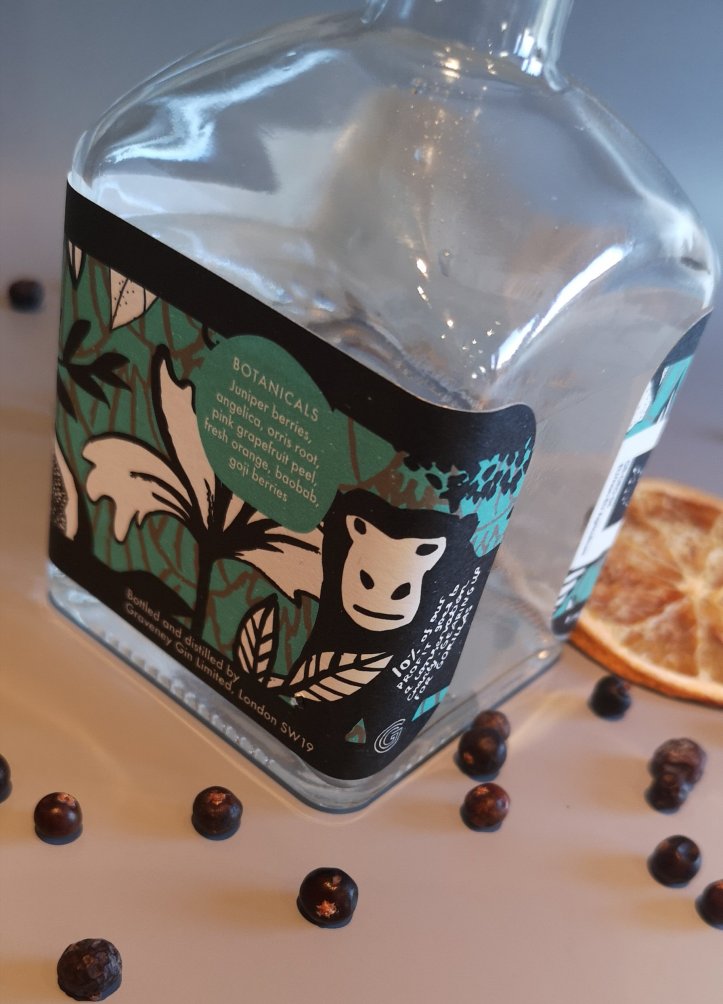 About that bottle. The label is a beauty – but the monkey is more than just a picture. Growing up in South Africa, her Dad instilled a charitable instinct in the young Victoria. Her childhood love of Gorillas was compounded after seeing them in the wild in Uganda and so when she set up Graveney Gin she knew which charity she wanted to support. Gearing up for Gorillas is a small not for profit organisation that aims to educate the locals and protect the rare mountain gorillas of Virunga National Park in Eastern DR Congo. So far they have sent them £7000 from sales which is incredible. To find out more about the charity go to Gearing up for Gorrilas.

Grove Fever Gin was inspired and created by a medical student working behind the scenes at the distillery. It is a more sophisticated variation of the original gin with rosemary and thyme to balance the juniper. Zach, the recipe creator works at St George’s Hospital so a percent of the profits from this edition will go to St George’s Paediatric department.

Figges Marsh has sweeter flavours with fig, honey and vanilla. But double juniper should keep this singing! Every time £200 is made from this gin Victoria plans to hold a vote to see where people want the money to go to, local charity will be favoured.

Graveney Gin was a great purchase. But in truth if you have a look at the reviews and the passion of the people talking about it online then I really knew it wasn’t much of a gamble.

I wish Victoria lots of luck with the new range and can’t wait to see how Graveney grows, it is definitely a great example of craft gin.

To find out more about Victoria and Graveney Gin head to graveneygin.co.uk